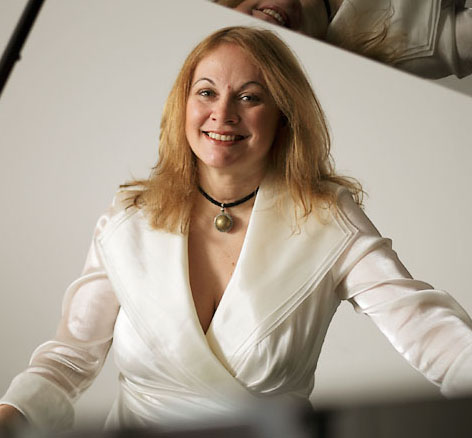 Juilliard-trained, Aysegul Durakoglu is a performer with versatile interests and a repertoire that encompasses both the earliest and contemporary styles. Her main expertise in the classical repertoire lies in the scores of Claude Debussy’s piano music. Aside from presenting many performances and lecture-recitals on Debussy’s works, she completed a recording of Debussy’s Twelve Piano Etudes. In the area of world music, Aysegul uses her piano technique to bring together a fusion of sounds and cultures in the hopes that her work will inspire others to extend beyond modern-day divisions and strife. She has performed solo and chamber music programs that have brought together the music of different cultures, including the Sephardic and Turkish traditions, Argentinian, Eastern European, and American. In 2015, she has presented a program entitled “Musical Journey with the Orient Express” in the Allen Room of the Jazz at Lincoln Center with her ensemble, Musica Mundana, followed by a performance at the Jumeriah- Pera Palas in Istanbul. Recently, she has released a solo album, “Dances through the Keyboard,” containing works by J.S. Bach, Chopin, and Debussy; and, has performed CD release recitals in Istanbul, Ankara, New Jersey, and New York.

Since her highly acclaimed New York Debut Recital at Merkin Concert Hall, where Bernard Holland of the New York Times described her musicality as, “nothing false or artificial but naturally come by,” Aysegul Durakoglu has concertized widely as a soloist and chamber musician both nationally and internationally. She was the featured soloist at the International Istanbul Music Festival with James Galway; Musical Intersections and International Niagara Chamber Music Festival in Canada; music festivals throughout Europe and Russia where her performances with the renowned Russian pianist Gregory Haimovsky were described as “genuinely expressive with intense emotional concentration;” and recently, International Ankara Jazz Festival in Turkey and Drom in New York City.

Born in Turkey, Durakoglu began her musical training at the Istanbul Municipal Conservatory where she studied with Verda Un and Judith Ulug. As a recipient of a scholarship from the Turkish Government, she came to the United States to pursue her graduate studies. After receiving her Master of Music degree from the Juilliard School, she earned a Ph.D. with notable distinction at New York University where she also served on the piano faculty. She focused her Ph. D. dissertation on the contrapuntal and rhythmic organization of Debussy’s piano etudes. Her teachers included Adele Marcus, Gyorgy Sandor, and Gregory Haimovsky. As a member of the NYU Chamber Music Society she premiered numerous works at Merkin Concert Hall and won the NYU’s Chamber Music Special Award for her contribution and leadership. In 1998, she established a Chamber Music Society, Musica Mundana, and has been concertizing since then.